Door Community Auditorium‘s Executive Director, Cari Lewis, recently announced its lineup for the upcoming season. Now in her 5th year as DCA’s leader, Cari has overseen a steady increase in the quality of local, regional and national acts that play this acoustically wonderful venue. The upcoming season will see the likes of Melissa Etheridge, Mavis Staples, Lyle Lovett, Justin Townes Earle, The Wailin Jennys, The Jayhawks, Josh Turner, The Wood Brothers and the Charlie Daniels Band gracing the stage.

The Door Community Auditorium is one of Door County’s many treasures. Located in Fish Creek, just 7-1/2 miles from the Blacksmith Inn On The Shore, the Auditorium was designed and built 25 years ago as a community-wide effort for all of Door County. In its fundraising stage, the DCA was primarily purposed to be the home of the annual Peninsula Music Festival, one of North America’s premier classical music festivals. Acoustically speaking, it would be hard to find another venue in America closer to perfection. At 750 seats, the DCA it small enough to afford every seat an intimate encounter with the talent onstage. 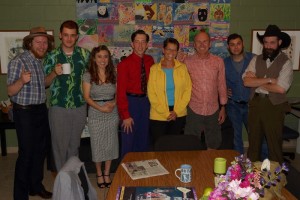 Each season the Blacksmith Inn On The Shore helps sponsor an artist’s appearance at DCA. This year we will be underwriting the very exciting young singer-songwriter, Justin Townes Earle. Like his father, Steve Earle, Justin Townes’ music leans heavily toward roots and Americana. He has 6 albums to his credit and has been touring tirelessly for the past decade with artists such as Old Crow Medicine Show & Gillian Welch, as well as with his father’s band. Earle’s appearance at the Auditorium will take place at 8:00 p.m. Sunday, August 2nd.

Tickets for the big-name talent are going fast. So go to Door Community Auditorium‘s Ticket Sales page and choose your favorite artist. Then come back to the Blacksmith Inn On The Shore’s website and book your room. We’d love to see you in Door County this summer!