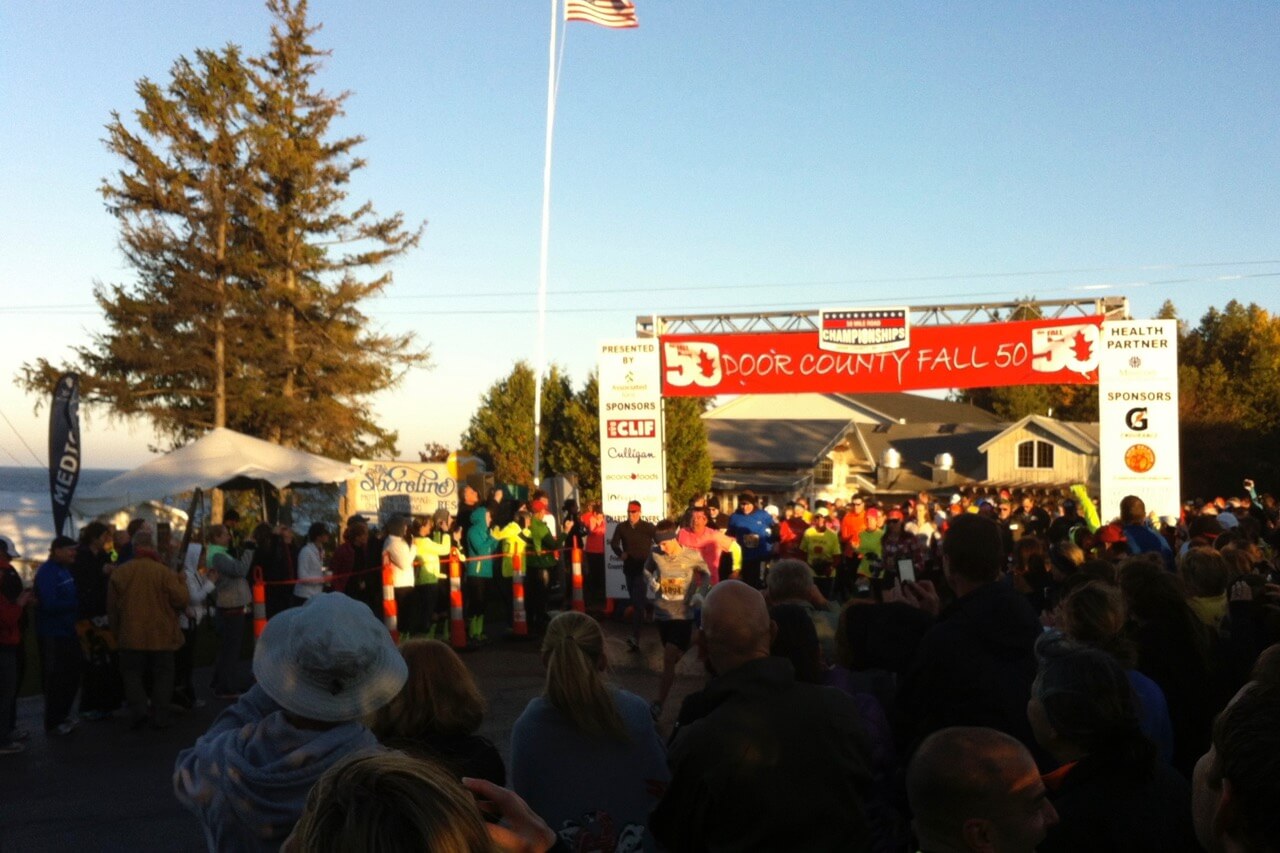 Are you lucky enough to have one of 500 team bibs for the 2017 Door County Fall 50? This year’s team relay race sold out in just over half an hour, disappointing scores of runners, myself included. While I don’t have it in me to snatch up one of the remaining solo running bibs, I definitely plan to be on hand for this epic Door County competition.

On Saturday, October 21, runners will meet in Gills Rock to embark on their footrace 50 miles south to Sturgeon Bay, as I have had the pleasure of doing several times. As the sun breaks over the harbor, runners begin in waves, giving the solo runners a 45-minute head start. Teammates will remove their hats at the singing of the national anthem and send their runners off with cheers and dancing. Part of the spectacle is that, while not required, many runners wear matching or complementary costumes, think the Spice Girls or Disney Princesses. Part of the challenge is running all day in these getups. As each wave begins, the crowd shifts back to the parking area. Jammed cars line up to drive almost nose-to-tail toward the first checkpoint. Busy roads are part of the fun, affording time to read team slogans painted on other teams’ rear windows. Really supportive crews jump out and show solidarity each time they pass their runner, hooting and clanging cow bells. Within each car, teams are sizing others up for the costume contest.

Team vehicles hurtle into the checkpoints, sometimes a paved parking lot but more likely a muddy field where volunteers admit only race participants. Crew members fly to the exchange point to send a new runner. Anticipation builds as the team waits for the runner to appear, wondering if the traffic has made them late and their runner has continued on. Then, as the runner appears, cheers erupt and the next bracelet carrier holds out a hand. She’s off, and the team wastes no time getting back in the car and moving to the next checkpoint.

The traffic ebbs and flows throughout the day, but the energy of the team vehicles never falters. In fact, around mile 47 as runners make their final climb on Bay Shore Drive, teams are even more enthusiastic. The end is so close.

As the sun slips below the Sturgeon Bay horizon, teams regroup to finally cross the finish line together in Sunset Park. An announcer greets them by name, and they pause for an obligatory photo. The pause doesn’t last long, as the lure of all-you-can-eat pizza and all-you-can-drink beer and wine inside the tent is strong. They have earned this pizza party. Families join their runners for dinner and they share tables with teams they’ve met throughout the day. Runners laugh as photos from their runs are projected on the ceiling of the tent, and they enjoy a much-needed sit. Sitting doesn’t last long, and the costume contest gets going. Some teams even jump on the stage with the DJ to show off their disguises. The contest winners and race champions are announced, and the exuberant dance party continues. Inspired by endorphins and fueled by pizza and local beer, locals and visitors alike dance the evening away in this glorious celebration of running and community.

Feel like you just can’t miss the Fall 50? Check the Blacksmith Inn’s availability to have a cozy place to crash after your 50-mile race.

Distance from Blacksmith Inn: The start is driveable in 30 minutes (19 miles)

Pre-registration required: Yes, registration opens in April; solo registration still available for 2017. Cost to watch this awesome event along the course is free!