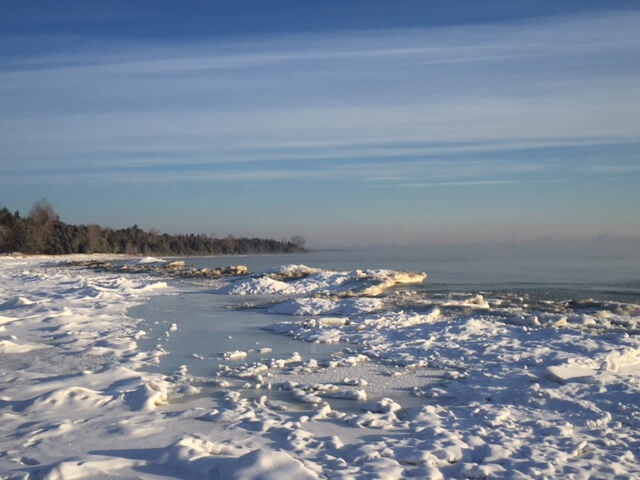 Ice on the lake

One very cold Saturday during my first winter in Door County, my husband suggested we attend Fish Creek’s Winter Festival. I’m certain that I protested this activity choice, fearful that I would be freezing. My husband prevailed, and I found myself getting out of a warm car and trudging toward a tent beside the Fish Creek Harbor. Though it was late morning, a sizable crowd was already there, reveling in full force. People were playing what seemed to be carnival games, dancing to live music and happily sipping beers and warm beverages. The first familiar face was our friend Lauren, who was manning a version of a ring toss game which used toilet seats rather than prettily-colored hoops. Lauren explained the ring toss was a fundraiser for her daughters’ dance class, so we stepped up and tried our luck. After a mediocre toilet toss showing, Tim and I went in search of a beverage. While waiting in line for our beers, we enjoyed some live music inside the warm tent.

A few sips in we felt more festive, so we ventured out onto the ice to see the real winter games. We stood for some time observing ice bowling, a game that is exactly as it sounds. Stacked straw bales comprise the lanes and a lucky high school student resets the pins after each throw. Next we enjoyed ice golf, a “one-hole” affair that challenges participants to hit a target well into the middle of the harbor. Easily the weirdest of the winter carnival games was the bike toss, again, just as it sounds. Throwers chuck a full-size bicycle as far onto the ice as they can. High school students jog out to retrieve the bikes as they’re thrown. The bikes were reused each turn, so by the time we arrived, they were really beat up, their wheels dented and chains dangling. A little in awe, we stood watching the events, soon speculating with other attendees about bike-throwing technique. Proceeds from the games benefit various local school groups, so locals and tourists alike were enthusiastic to play. Surveying this small crowd standing on the ice on a frigid February afternoon, I felt I was seeing the real Door County. Here were the people who make the summer season magic kicking back and enjoying a lively party only they could design.

Though some describe the late winter months as sleepy ones, in Door County they are anything but. Indoor and outdoor winter festivals punctuate the cold weeks. Check out all of the peninsula’s varied and exciting events.

If you can make it, this year’s Fish Creek Winter Festival is the first weekend in February.

Pre-registration required: Yes, if you wish to enter your team

Last year I was lucky enough to find a seat in Sister Bay’s packed village hall for a screening of a film on the Eagle Tower funding project. The crowd was indicative of the interest in that weekend’s Door County Short Film Festival, which lasts two days the third weekend in February. This short film celebration shows both American and international short films.

Further south on the third Saturday in February is the Fire and Ice Festival in Sturgeon Bay. Stroll Third avenue and check out the live snow-carving competition. Warm up near blacksmith James Viste’s steel-bending fire.

Check the Blacksmith Inn’s availability for a fireside bed during your winter weekend getaway.