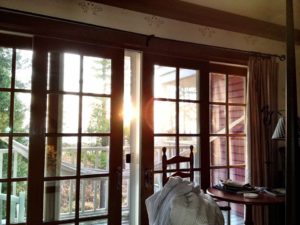 Sunrise over the harbor

Every year plenty of couples flock to Door County to get hitched. They come from Chicago, far corners of Wisconsin, and some from much further away. Two years ago my husband and I were married on the shore of Rowleys Bay in northern Door County. For us, getting married here was a gift; we had lived on the peninsula for one year already, and we knew our guests would love spending an August weekend exploring our new home. Our guests, who hailed from Green Bay, Tomah, Chicago, Colorado, Ohio and beyond, were nearly all midwestern transplants, and a return to Door County rekindled memories of their own childhood summers.

Aside from gorgeous scenery, another benefit of a Door County wedding is there is no need to travel for the honeymoon! Recently I talked with friends of mine, Chris and Megan Horvat, who just celebrated their fifth wedding anniversary. As Megan is a native, most of her family didn’t have to travel far to be part of her special day. Megan and Chris were married on a Friday in November, still squeaking in an outdoor sunset ceremony. The Sturgeon Bay Yacht Club hosted their reception, where Chris remembers that guests danced the night away. The following morning, Chris and Megan headed off on their “minimoon,” a one-night getaway to Northern Door. They had booked a room at the Blacksmith Inn to relax and recharge.

Megan remembers that the goal of this short honeymoon was “just to reconnect and spend time together.” Chris recalls that the week of the wedding “was stressful because it was a Friday. It was…outdoors, November, RSVPs not coming, stupid folding chairs…” With the wedding itself successfully finished, the couple wanted time to unwind. Even though they both live in Sturgeon Bay, they felt being in Northern Door was like an escape. They tried Alexander’s restaurant for the first time. Staying at the Blacksmith Inn was also a key part of the magic.

When I asked Megan and Chris to tell me about their stay, they responded in unison “I loved it!” Part of the reason they were interested in staying at the Inn is its status as a listing on the National Historic Register. Chris described the atmosphere “Personally, I liked the season. I liked that it was November because it was quiet and…the parking lot wasn’t full. We had a room on the back side, facing the water, and actually, one of our gifts was this really decorative wool blanket. We went out on the hammock with all the pillows and that wool blanket, and we slept out there for quite awhile. It was great. Something about the sound of the waves on Lake Michigan…I was out. At some point we woke up and realized…we should take advantage of this nice room.”

Megan and Chris enjoyed Baileys Harbor like any visitor would, going for a run down Ridges road, and enjoying hot cider on the Blacksmith Inn pier in the evening. When they checked out on Sunday, the couple was surprised and delighted to receive a gift certificate inviting them back for their first anniversary. They returned to the Blacksmith Inn a year later. Megan remembers they stayed in the same room and again enjoyed the hammock by the lake.

Chris and Megan did eventually take time to travel to Ireland on an extended honeymoon, though it sounds like they could have filled an entire week’s time in Northern Door. I asked what romantic and fun activities they recommend to visiting honeymooners, and Chris and Megan had lots of ideas. Topping the list was a candlelight ski or snowshoe in one of the nearby state parks. Next was dinner at Alexander’s. They also recommend hikes at the Ridges or a visit to one of Door County’s many land trusts. Megan likes brews from Tea Thyme in Sister Bay, as well as the Door County Brewing Company.

Overall, Chris commends the Inn’s attention to detail. Megan adores the shampoo and conditioner she found in the shower and has been trying to find the product in stores ever since! Both of them still crave the oatmeal cherry cookies. While the Horvats would love to make an annual return to the Blacksmith Inn, this year the arrival of their son Finn has kept them very busy.

Are you thinking about spending your honeymoon, minimoon or anniversary in Door County? No matter the season, the Blacksmith Inn on the Shore has you covered with a relaxed, romantic atmosphere, a private double whirlpool, and, in most months, a hammock. Reserve your ideal honeymoon here.