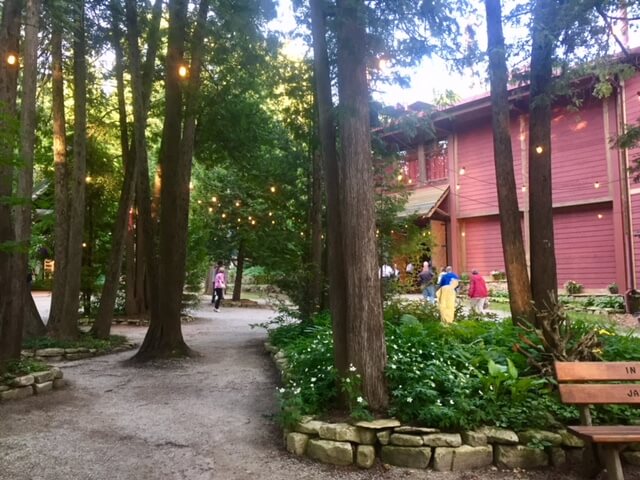 It’s a warm June evening as my husband Tim and I turn onto Peninsula Players Road. When we reach the Peninsula Players parking lot, we’re halted by a young lady in an orange vest who greets us serenely and asks if we’ve been to the Players before. “Yes,” we tell her, and she points us to her counterpart in a gravel parking lot to her left. The drive declines sharply as we pull into the parking area which is surrounded by trees. There’s even one right in the middle of the lot. We slowly drive past it to meet the parking attendant who instructs us to back in to a spot. I grab a jacket as I climb down from our truck—it’s warm now, but as the sun goes down, so will the temperature. My husband bug-sprays himself.

Looking out for the other vehicles who are backing in around us, we cross the parking lot and follow a stone staircase down toward a looming red building that is somewhat camouflaged in the trees. The stone path forks, and signs point us to “Box Office” and “Beer Garden.” We turn right toward the box office. It’s a small building separate from the theater. There we encounter no line, only a pleasant attendant who sells us our tickets and lets us pick our seats.

After securing our seats in the lower section, we mosey down another path toward the beer garden. A bar is set up in a small brown hut, and nearby are about a dozen wooden tables, most occupied by groups of friends who’ve gathered to eat picnic supper before the show. They’re noshing and talking happily as big band music plays in the background. No seats are readily available, but we don’t mind. Tim and I stroll all the way to the water and enjoy the view of Green Bay. It’s still too early for the sunset, but this will be a perfect spot to see it during intermission.

A trip to Peninsula Players is magical, no matter how many times you’ve been. The theater group has been putting on great plays since 1935, and in this location since 1937. The entire theater campus was a boys’ camp which was gradually transformed from an outdoor stage to the open-air, nearly-three-season theater that is present today. Performances themselves are put on under the shelter of a roof, but the “lobby” is outdoors in the surrounding garden. Strings of lights swoop through the trees and abundant foliage and flora maintain the fairy-garden feel of the place. 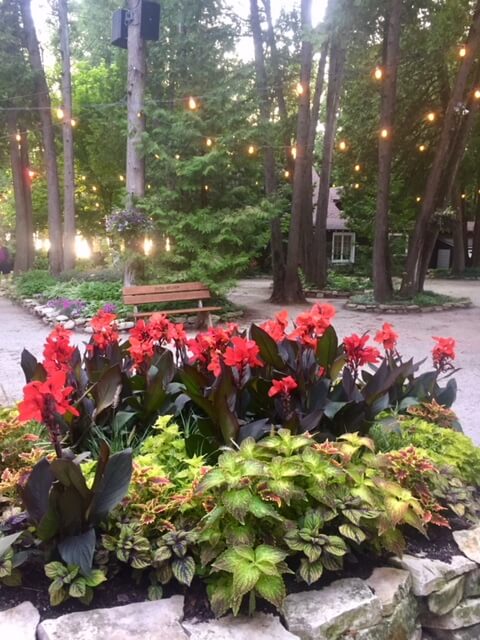 Diners begin to drift toward the theater, so Tim and I follow. We easily find our seats. Ushers pull huge curtains over the entrances to block the early-evening sunlight and we settle in to enjoy the play Now and Then. It’s a love story set in the early 1980’s, with only four cast members. Some are familiar faces we’ve seen in Players shows before. The acting is great, and the story develops a twist just before the lights come on for intermission.

We emerge from the theater to find darkness has all but settled in the forest. I wait in line for the bathroom, then join Tim in the beer garden. There, most theater-goers have circled round a massive rectangular fire pit, where there is a roaring blaze. We catch a glimpse of the sun through the trees as it sinks below the horizon. 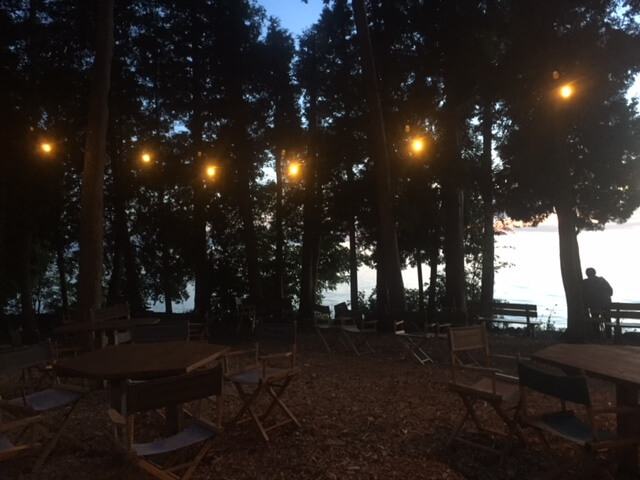 We talk briefly about the play. We have been fortunate to have seen several plays and one musical at the Peninsula Players. Most were comedies, and all were well-done. Now and Then, a drama with hints of comedy and a sprinkle of science fiction, is living up to our expectations.

A gentle tone interrupts our conversation to remind us the show will recommence in five minutes. We hurry to take our seats. A new character has entered the story, and the plot continues to develop rapidly in the second half. By the end, both Tim and I have tears streaming down our cheeks. After the show, we climb back up the stone steps to the parking lot. It’s a bit of a free-for-all to get out of the parking lot, but I imagine that’s why we were instructed to back in to our parking spaces. On the drive home we discuss the themes of the play and the acting. Theater makes us contemplate our own lives in ways that film and television rarely can.

Distance from the Blacksmith Inn: Driveable in 14 minutes (8.4 miles)

Door County has a wealth of quality theater companies. Also on the bay side, located within Peninsula Park is Northern Sky Theater. This truly open-air theater presents excellent family-friendly musicals in most weather. Shows are often stories about Wisconsin and the midwest, making them relatable and familiar.

Distance from the Blacksmith Inn: Driveable in 13 minutes (9.6 miles)

Nearest to the Blacksmith Inn on the lakeside is Door Shakespeare. Also an open-air theater experience, this company presents pieces by its namesake in the garden at Bjorklunden. Featuring just two pieces each season, performances are polished and intimate. You need not be an aficionado of the bard to appreciate Door Shakespeare’s sometimes traditional and sometimes humorous interpretations.

Distance from the Blacksmith Inn: Driveable in 7 minutes (3 miles)

After your afternoon or evening at the theater, pull up a chair on your balcony at the Blacksmith Inn and mull over the the show and the meaning of life. Check availability to reserve your room.