What is the best way to see Door County? Some would argue it’s on foot, hiking through state parks and strolling on beaches. Others contend it’s from the water, from the deck of a boat or the top of a … Continue reading → 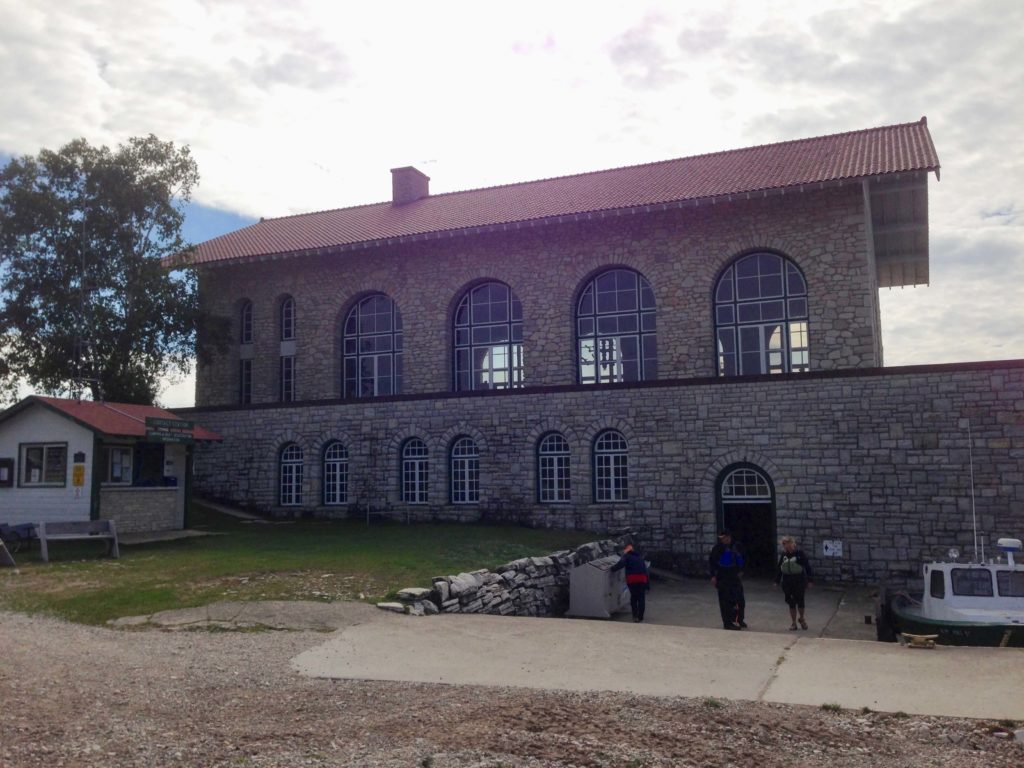 A few weeks ago, my husband’s father and brother came to visit Door County. They’d been to the peninsula before, so we wanted to show them a place they’d never experienced. Tim and I brainstormed and determined that Rock Island, Door County’s island state park, was our destination. We had visited the island several times before, and we knew our guests would enjoy the journey as much as the remote beauty of this place. Rock Island was at one time privately owned by the Icelandic developer of the transformer, Chester Thordarson, and he built its most striking man-made feature, a massive stone lodge known as the boathouse. Rock Island is also home to Wisconsin’s oldest lighthouse. The mostly-wooded island boasts scenic cliffs and dramatic rocky beaches. An island without vehicles of any kind, including bicycles, Rock Island is a rare escape from modern life.

We carefully considered our timetable. To reach Rock Island without your own lake-going vessel, two ferry trips are required. First, we had to catch the Washington Island ferry leaving from Northport on the mainland. We decided to catch the 9 am ferry to make the roughly 40-minute crossing. Once on Washington Island, our aim was to disembark and drive across the island to Jackson Harbor to catch the 10 am Karfi, the passengers-only ferry that transports day visitors and campers the short hop to Rock Island. We’d have plenty of time to explore the boathouse, hike some of the miles of trails and visit the Pottawatomie Lighthouse before catching a later Karfi back.

The Saturday of our excursion dawned wet and rainy, but the forecast looked promising for the islands. Optimistic, we packed some rain gear and piled in Tim’s dad’s Subaru to head to the ferry dock. The rain slowed to a drizzle, but thunder and lightning continued. In hopes of staying dry, we remained in the car for the ferry ride. Once on the island, the rain seemed to have lifted. We waited our turn to disembark and set off for Jackson Harbor. We arrived with a few minutes to spare and were easily able to get on the passenger ferry. In fact, only one other passenger was braving the storm to cross to the little island.

From the Karfi, the thunderstorm was spectacular. Dramatic clouds hovered over the horizon and streaks of lightning were frequent in the south and west. It was a natural phenomenon I realized we would have never seen had we been deterred by the rain.

The actual rain held off as we arrived at the boathouse. We traipsed up the dock and went in to marvel at the rustic Scandinavian space. Thordarson, who was an enthusiast of Norse mythology, commissioned an entire banquet table and chairs to be carved with images of gods like Odin, Balder, Loki and Freyr. Tim’s brother, who shares this passion for mythology, was enthralled by the detail and craftsmanship. The boathouse contains other interesting Native American artifacts and one of Thordarson’s early transformers.

Next we set off hiking north on the Thordarson Loop trail. We hiked a gentle uphill into the woods. When we reached a fork with Fernwood trail, we took it, and made a three-mile loop that brought us to a beautiful scenic overlook of Lake Michigan. A bit further on we visited a 19th-century cemetery and eventually arrived at the Pottawatomie lighthouse. A docent guided us through the former lighthouse keeper’s restored home and even brought us to the light tower to see the still-operational light visible to boats through its glittering fresnel lens. He enthusiastically told stories of the keepers who had lived here a century ago, and we tried to imagine living in this beautiful but remote place. 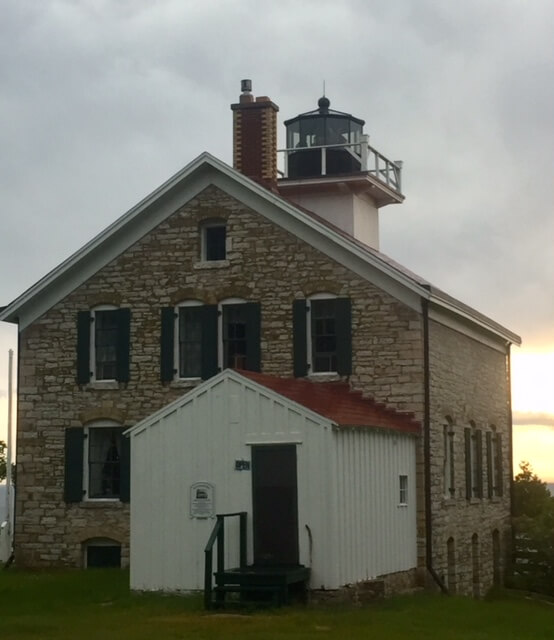 During the tour, a light rain began anew. Doggedly, we donned our rain jackets and began the 1.3-mile hike back to the boathouse. The Karfi would arrive soon to take us back to our car on Washington Island. Plenty of other campers had the same idea, and we patiently waited while several families and a boy scout troop loaded their gear onto the passenger ferry. The return trip was a damp one, but our spirits were high.

Upon arrival on Washington Island, slightly chilled, we decided a warming beverage was in order. We made our way to Nelsen’s Hall, a well-established bar and restaurant known for being the oldest continually-operating tavern in Wisconsin. There, Tim’s dad and brother joined the legendary “Bitters Club,” into which one is inducted by taking a shot of Angostura aromatic bitters, the boozy herbal infusion that is 90-proof and usually reserved as just one ingredient in a cocktail. Despite the stuff’s somewhat unsettling aftertaste, Nelsen’s has inducted thousands of card-carrying Bitters Club members.

Feeling considerably warmer, we drove to the ferry dock to make the four o’clock ferry. The rain had subsided, and the air was warming, so on the return trip we made our way to the upper deck to enjoy the scenery of the crossing. From the deck we could see the other islands that dot the passageway between the peninsula and Washington Island. The lighthouse on Plum Island was easily visible as the overcast of the day lifted. 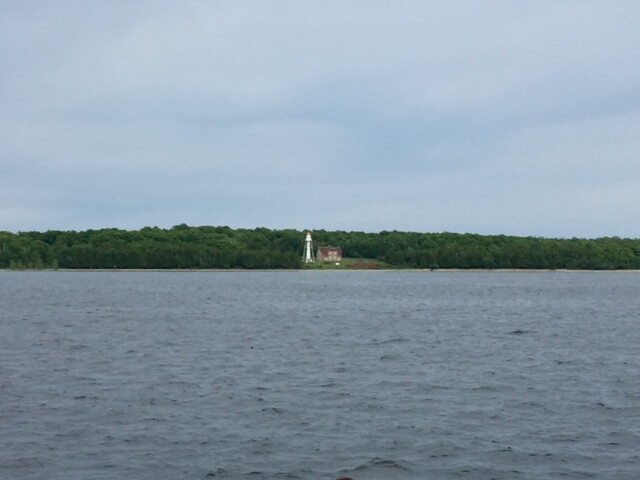 Had the weather been more favorable, I know we would have spent still more time exploring beautiful Rock Island. Despite the rain, we felt we’d had an adventure and been privileged to see nature as we don’t normally see it.

For a soft place to lay your head after a day of island adventures, check the Blacksmith Inn’s availability.