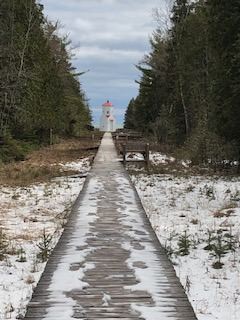 When I was a child, our family would take day trips to Point Beach State Forest near Two Rivers, Wisconsin. We would park in one of the beach parking lots and claim an area near one of the grills. After a delicious supper, the four of us would take a walk down the beach, our golden retriever Ruby loping along just ahead of us. As twilight descended and the afternoon breeze died down, the only sounds were the calls of gulls and the lap of the waves as they hit the shore. To my left was only Lake Michigan and to my right only the beach grasses and forest. Strolling along this way for nearly a mile, the real world would fade, and the beach seemed to go on forever. Then, a burst of light in the distance, just at the treeline, would catch my eye. First I would think I had imagined it, but when another flash caught my attention, my gaze looked curiously for the source. Out of the trees, seemingly in the middle of nowhere, the Rawley Point lighthouse materialized. Crisply white against the darkening forest it was enticing and intimidating at the same time. The fact that the tower and grounds are off-limits to the public only increased its attraction. We would stop and take in the scene that married historical practicality with modern romance. Then my family would turn and stroll back down the beach, casting a look over our shoulders every now and then to catch a beam of light as it swept past.

Lighthouses are a unique feature of our past that have survived into the 21st century in both folklore and brick and mortar being. Once a necessity for vessels on the Great Lakes, many lighthouses still function today though most boats have GPS and other tools that provide more detailed information about the shoreline. Why do we maintain so many of these near-obsolete structures? It may be the structures themselves. Lighthouses’ dramatically high towers are the American version of fairy tale castles. The stories surrounding lighthouses and their keepers often involves ghosts and the supernatural. The light itself is a feat of design and technology, its iridescent lenses like parts of a massive chandelier. Viewed from a stormy lake, lighthouses are both a beacon of warning and blink of humanity. 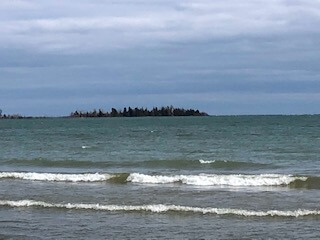 From the opposite shoreline the now darkened “bird cage” lighthouse in Baileys Harbor remains part of the tree line.

To help boats navigate the Door Peninsula’s 300 miles of shoreline, it many lighthouses, 11 of which still exist, some still in operation. Each year thousands of visitors flock to Door County to see and explore many of the lighthouses. Most are still open for a visit and many, like the Cana Island Lighthouse, Baileys Harbor Range Lights, Eagle Bluff Lighthouse and Pottawatomie Lighthouse on Rock Island are open for guided tours.

To get up close to some of Door County’s more obscure lighthouses, the Door County Lighthouse Festivals the first weekend in June or the second weekend in October are perfect occasions. The Door County Maritime Museum has curated this event to bring a choice of lighthouse adventure tours to visitors. Choose from boat tours, light hikes, trolley rides and haunted explorations, all with Door County’s lighthouses at the center. Normally closed to the public, some tours visit the Sherwood Point Lighthouse, the Chambers Island Lighthouse and the Plum Island Range Lights. Tours leave from a variety of locations in Northern Door.

Distance from the Blacksmith Inn: Tours depart from various locations

After a half or full day exploring days of old, retire to a room in yet another building on the National Register of Historic Places. The Blacksmith Inn’s timeless charm is sure to be a perfect backdrop to a weekend devoted to the past. Check our availability for your lighthouse adventure weekend.