Sister Bay loves goats. The motif is sprinkled throughout the town. Wooden cutouts of goats decorate the lawns and front porches of local businesses. Actual goats can be seen atop the roof of Al Johnson’s Restaurant. Baby goats are often posted outside of the Door County Creamery, munching hay and waiting for a friendly scratch from passers-by.

Last June, a visiting friend and I went into Sister Bay to stroll and browse in the shops. It was a drizzly morning, so we didn’t expect too many other shoppers. When we arrived downtown, my friend commented on the number of people crowding the sidewalks. It was true, there did appear to be quite a lot of umbrella-sheltered folks out for such an inclement day. I assured my friend that this was a normal June-in-Door County occurrence. Sister Bay is a popular tourist destination, after all. We started our shopping near the top of the hill. After perusing clothes and handbags in Spot we stepped back outside to find the crowd still thicker, especially near Al Johnson’s Swedish Restaurant. I couldn’t deny anymore that the throngs seemed to be waiting for an event beyond a Saturday morning in Sister Bay. We decided to walk down and check things out.

We soon learned folks were gathered for the annual “Roofing of the Goats” parade. Since the early 70’s Al Johnson’s has been famous for the live goats that graze atop its sod roof. Naturally, they cannot stay up there year-round, so at the start of the summer season, the Johnsons parade their goats through town before sending them up on the roof. The goat parade has grown to include goats from the Door County Creamery and other local herders, though the Johnsons’ remain the only “roofed” goats.

My friend and I joined the eager crowd in anticipation of the goats’ arrival. We didn’t know what to expect, but the hundreds of tourists gathered indicated that the event would be worthwhile. About mid-morning, trucks finally arrived bearing bleating four-legged creatures. The Al Johnson’s goats, some long-haired and horned, plodded calmly up Bay Shore Drive. The Creamery drove their goats slowly up the parade route on an open wagon. 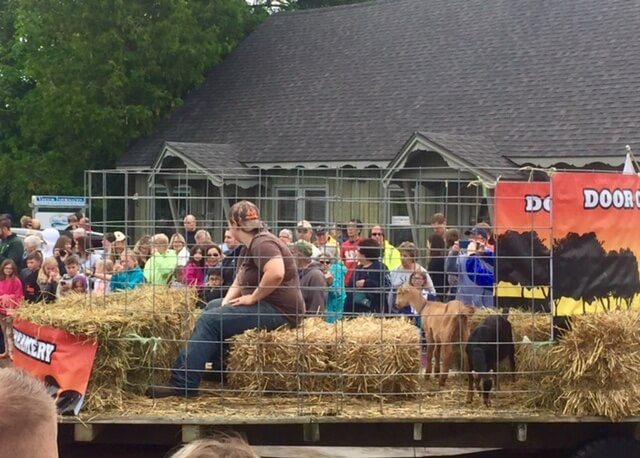 The crowd swarmed off the sidewalk to get close to the famous goats for selfies. Eventually, the small parade made its way to Al Johnson’s, though we never got close enough to see the goats actually “roofed.”

This year on Saturday, June 8, the goats will march again. Following the parade, Al Johnson’s holds “Goat Fest,” a small but enthusiastic celebration of Sister Bay’s love of goats in their Stabbur Beer Garden. Food, music and games are on the docket along with a Swedish pancake-eating contest. To get a preview of the famous goats, visit Al Johnson’s goat cam.

Distance from the Blacksmith Inn: Driveable in 12 minutes (9 miles)

Though my friend and I attended our first “Roofing of the Goats” by accident, clearly hundreds of visitors and locals alike intended to see the event. A simple affair, the goat parade’s pure fun and whimsicality are what make it memorable. If you’re lucky enough to attend this quirky early June event, afterward relax in a whirlpool at the Blacksmith Inn. Check our availability here.