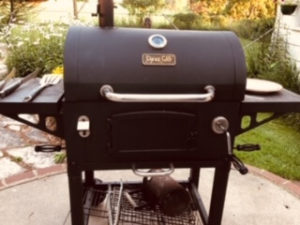 One late August day I climbed aboard Washington Island’s “Cherry Train” with my then-fiance and my future parents in-law. We rode the tour wagon, which was towed by a van, past several historical landmarks. As we neared the small airfield in the northwest quadrant of the island, the tour guide informed us that the smoky, carmely odor we detected wafted from the Death’s Door Barbeque Competition. Would we like to get off for a visit and get on a later Cherry Train? Would we! My now-husband, and his dad in particular were very enthusiastic. We climbed down from the train and crossed the grassy field toward inviting smells. I wasn’t sure what to expect from this impromptu adventure; not being a barbeque connoisseur or even an enthusiast myself, I didn’t know quite how one would compete in such an event. Tents galore populated the otherwise open meadow, each with a cooking contraption adjacent. Some had fairly conventional outdoor grills, while others had elaborate smokers with multiple doors to control heat and little chimneys to release puffs of white smoke.

Hungry and salivating we prowled the competition grounds for our first taste of expertly-cooked brisket. What we learned is that a barbeque competition is a tough place to be before noon. Many of the competitors were still in the process of smoking or slowly grilling their pork ribs and cuts of beef and chicken. They wouldn’t be finished and judged until later in the afternoon, starting with chicken at noon, then continuing to pork ribs, pork, beef brisket and dessert. After the judging, competitors would offer their prize meats for tasting or sale. In the meantime, the perspiring chefs talked avidly with visitors and fellow competitors between adjusting their coals and painting hunks of meat with sauce.

We talked with a few apron-clad cooks and eventually we found some who were also vendors. These blessed people had brought along some meat not for judging but just for eating, and eat we did. We stocked up on ribs, wings, and even a pork-drenched baked potato. These we carried to a tent filled with tables and squeezed in. A young duo played folksy music that was just the right genre for the occasion. We shared the delicious hot food and washed it down with some local brews. The musicians took a break and a magician stepped onto the low stage for a brief set; we were at first skeptical, but the magic-maker was a true performer, keeping our attention and his secrets even in the casual, intimate setting.

After awhile we wandered out of the tent and among the competitors once more. Some were slathering the finishing seasonings on their meats in preparation for judging. Needing to catch the Cherry Train, we didn’t stay for the actual competition, but our interest had been piqued. As an amateur foodie, the Death’s Door Barbeque Competition was a fantastic place to sample new flavors from barbeque masters who are dedicated to their craft. The locale was also unique, and I marveled at the level of commitment of the cooks who brought their whole setup, from grills and smokers to RVs and tents across Death’s Door on the ferry to Washington Island. These folks were not messing around, and the proof was in the pork.

The 2019 competition is on Saturday, August 24. While on Washington Island, take time to visit beautiful Schoolhouse Beach and to just breathe at the Lavender Farm. After a full day for the senses, return to the peninsula and unwind at the Blacksmith Inn. Check our availability for your delicious adventure.