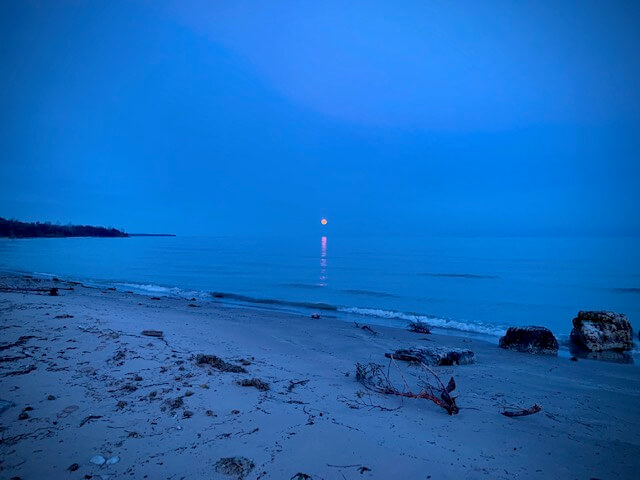 Dance by the light of the moon at a Swingin’ Door Big Band Review.

Big, bold and brassy perfectly describe the sound of Swingin’ Door Big Band, the jazz ensemble that performs live to get Northern Door dancing. My friend Kayleigh and her husband Caleb attended the Swingin’ Door Big Band Review last October at Maxwelton Braes Lodge in Baileys Harbor. Kayleigh, an experienced ballroom dancer herself, described how Swingin’ Door set the scene for the evening, saying “they make the whole setting feel very classical…they would do commercials that seemed 50s-esque, between songs. It sounded like you were listening to the radio—years ago.”

The event began with a sit-down dinner. Kayleigh and Caleb arrived at Maxwelton Braes after the meal—they were there for the music. Swingin’ Door Big Band are no amateurs, either. They’re part of the Peninsula Symphonic Band, and they can get a room moving. As soon as plates were cleared from the tables, the band invited couples to the dance floor. “As the night progressed, more and more felt comfortable because there were a few that were out there that knew what they were doing and were asking people to come dance with them,” Kayleigh explained. The instrumental music ranged from East and West coast swing to a few slow songs that enticed waltzes.

No experience is necessary to have a great time on the dance floor. Kayleigh and Caleb are experienced dancers who’ve graced the Caves, a literal underground swing dancing venue in St. Paul, and plenty of dance floors in Chicago, their former home. Kayleigh says she learned to dance for performances with her church, and her brother was her partner. “It’s the easiest thing to learn—my brother has no rhythm at all, and he’s a great swing dancer. The steps are easy to follow, and it’s repetitive. Anyone could do it.”

Since moving to Sturgeon Bay, Caleb and Kayleigh haven’t found a regular place to jive, but they had a blast at the Swing Review in October. Kayleigh described how Maxwelton Braes’ cozy dance floor eventually filled up, and the rest of the dining room was full, too. “Many people didn’t dance, just enjoyed the great music,” she said.

Swingin’ Door Big Band returns to the stage at the Lodge at Leathem Smith Thursday, February 13th. Grab your partner and have dinner before you hit the dance floor. Dinner specials are available 5:30-6:30, and the band starts at 7. Take a lesson with Andria from Dancin’ on the Door at 7:30 to brush up on your steps, then twirl the night away.

Distance from the Blacksmith Inn: Driveable in 31 minutes (22.1 miles)

Pre-registration: The Lodge recommends calling for a dinner reservation

Cost: $10 cover charge with dinner; if not dining, a 2-drink minimum is required

To those contemplating swing dancing for the first time, or the fifth, Kayleigh says laughingly, “You don’t look as stupid as you feel. If you’re out there having fun, you look good! It doesn’t matter if you get all the steps right. Let it happen.”

Maxwelton Braes also plans to host more Swingin’ Door Reviews in the summer and fall of 2020. Check the Blacksmith Inn’s availability for your toe-tapping visit to the Door peninsula.